The more you know yourself, the more patience you have for what you see in others.

Early 18th century (as a noun): from Arabic Barmakī, the name of a prince in the Arabian Nights’ Entertainments, who gave a beggar a feast consisting of ornate but empty dishes.

“Fresh words could help us arrive at fresh ideas, for there is an intimate connection between thought and word. Careful use of words requires careful thinking.”

In Israel they have the Dead Sea and in Italy the Holy See.And sinners see as well.

Don’t tell Aviv I read Hebrew between the lines

My husband told me in a dream to move to Ealing. So I went to A & E and then to a spiritual healer.After all my husband is in heaven.So I am going to the beauty salon for a full body massage.And my body is very full.It will be like Heaven to me

Oh, you are such a rotter,damn!

He asked if Nick could see her but she’s in Malta.

So,hoe my field and plant my panorama in the British Library.

What are Vichy potatoes?

But a pest is not needed here.We have more than we can use.

I feel as if I have Riga mortis.

Warsaw is an apt name for this sad city and the Jews who rose from the Ghetto and fought so bravely.And the Poles who fought the Nazis while the Russians stayed away,

She wore a short dress and a cape in town.Before she discovered Bikini

There’s an ambush, a rose bush and then there is Stellenbosch.What does it mean?

Meaning is not innate nor in Innsbruck

Like many of you,I have a lot of cables,chargers,pencils for drawing, other art materials and so on.I have a really nice  wicker basket  with a  lid on wheels which I can’t get on the bus anymore.I thought one day,if I got some polythene bags in different colours I could put some of these things inside.And it does work for me and holds a lot.Not recommended as shared storage with a family member!
Sewing boxes with compartments are useful.Maybe fishing bags?

As you can see I have a broken lamp which my husband bought and I keep hoping I can mend it but maybe soon I will decide it can’t stay,His family always have a lot of ornaments and pottery and so on.Meanwhile I use the lamp from IKEA.
Emotionally I find it hard to remove things we bought together.I am sure if I were a bit stronger I could fix that lamp
I realise as well that  keeping these things is a way of clinging to his  presence.But  I don’t have that much space.I have spent many hours drawing that lamp before and after it was broken.So it holds a lot of emotions for me
I suppose it’s books that I have collected over the years.I gave away my textbooks and mathematics ones but I want to keep enough to feel I can take a little break from life  by immersing myself in them.

My art teacher said never throw your work away.I was the least able person in the class but  when I look at my creations I think they are better than I feared.Words come to me easier than images.I still feel nervous but  it helped me to do digital art
I think I must be the eternal student.But I recommend it as it helps me through hard times when I can sit and write or draw.I feel lucky I’ve been able to start writing so late and got to  enjoy it very much.I am sad when I hear people say,I can’t write poetry or draw.If you learned to write with a pencil at the age of 5 ot 6 then you can learnt to draw.. as long as you are prepared for the peculiar images you might produce and also for the odd bit of envy or cruelty or truth

I have also been fortunate in being able to use Mike Flemming’s  photographs and been encouraged by  his enthusiasm  for nature, books,poetry and music.A  pleasure to  have a  younger brother  like Mike.I hope  you enjoy  his images as much as I do

“Who are some of your biggest influences in your poetry?
My influences are as varied as Wallace Stevens, TS Eliot, Adrienne Rich, Basho, Tukaram, Akka Mahadevi, Sangam poetry, Denise Levertov and Neruda! I admire AK Ramanujan as poet and as translator, and Arun Kolatkar as well. And there are many poets whose work I enjoy, who are too numerous and varied to name from John Burnside to Savithri Rajeevan and Manglesh Dabral!

What is the state of contemporary poetry in India?
Contemporary Anglophone poetry in India seems to be bristling with activity. There are lit fests, poetry competitions, performance poetry sessions, spontaneous addas, and quite a flurry on the internet and in social media, in particular. Something’s definitely in the air. And that’s to be celebrated.

Of course, when a form is suddenly on the upswing, there will be a fair amount of indifferent verse as well. That’s inevitable. There do, however, seem to be several distinct, self-assured and skilled voices that have emerged on the scene and that’s exciting.

On another level, it takes time for even the most assured voices to truly become themselves. For craft alone does not make a poem, and neither does mere inspiration. There’s a particular mix of innocence and experience, of assurance and bewilderment that is integral to a creative process – and that takes a long time to arrive at. Probably a lifetime. It’s part of the much larger journey of growing into yourself.”

“Airport lounges, flights – those are good places to scribble random lines. And my bed is a good place to revisit those lines and work with them. I like the process to seem as undoctored as possible, so that it feels like play rather than work, doodling rather than penance. So, no desks for me – that would be too formal, too deliberate. You need a studied carelessness to write a poem. A kind of lazy guile. And ball point pens and books that allow me to scribble in the margins – that’s my thing. Many of my poems have been birthed in the margins!

Quiet definitely helps. I need a lot of it anyway, more than most people I know. But on occasion, a bustling café can offer just the right mix of dynamism and stillness. While others are busy leading their lives, you can quietly follow the course of your poem. That’s fun!”

In  human hearts there is an unhealed wound
From such loss no person is immune
Mine I feel.with yours I empathise
For finding  we are like is no surprise
In close up.  the horror seems to loom
In perspective, it  is no High Noon
And from another angle, perhaps a boon
Arriving  by some mystery in disguise
In human hearts
By envy grief and  anger we’re consumed
Until we wish to die to end our doom
Yet should we look again with different eye
We shake our heads and shiver at the lie
As if perception’s shackled onto zoom
In human hearts

Michele Filgate: Taylor, in your novel Stranger, Father, Beloved your character Michael sees his wife talking to another man at a party and is certain that’s the man she should have married. From the outside Michael is a successful man with a nice house and a perfect family, or so it seems. So why is a man who seems to have everything envious of a moment of passion he witnesses between his wife and a stranger?

Taylor Larsen: I love the question because it contains the answer. He sees passion for a second and that’s what’s missing from his life. He is one of these people who is so caught in his head and disconnected from his real desires that he actually sees two people having a spontaneous, beautiful moment and is so envious and it just ignites in him this desire to be spontaneous, to be in the moment. As someone who is sort of an intellectual, I can relate to that feeling of feeling really disconnected and wanting passion, which is kind of what I think everybody really wants deep down. 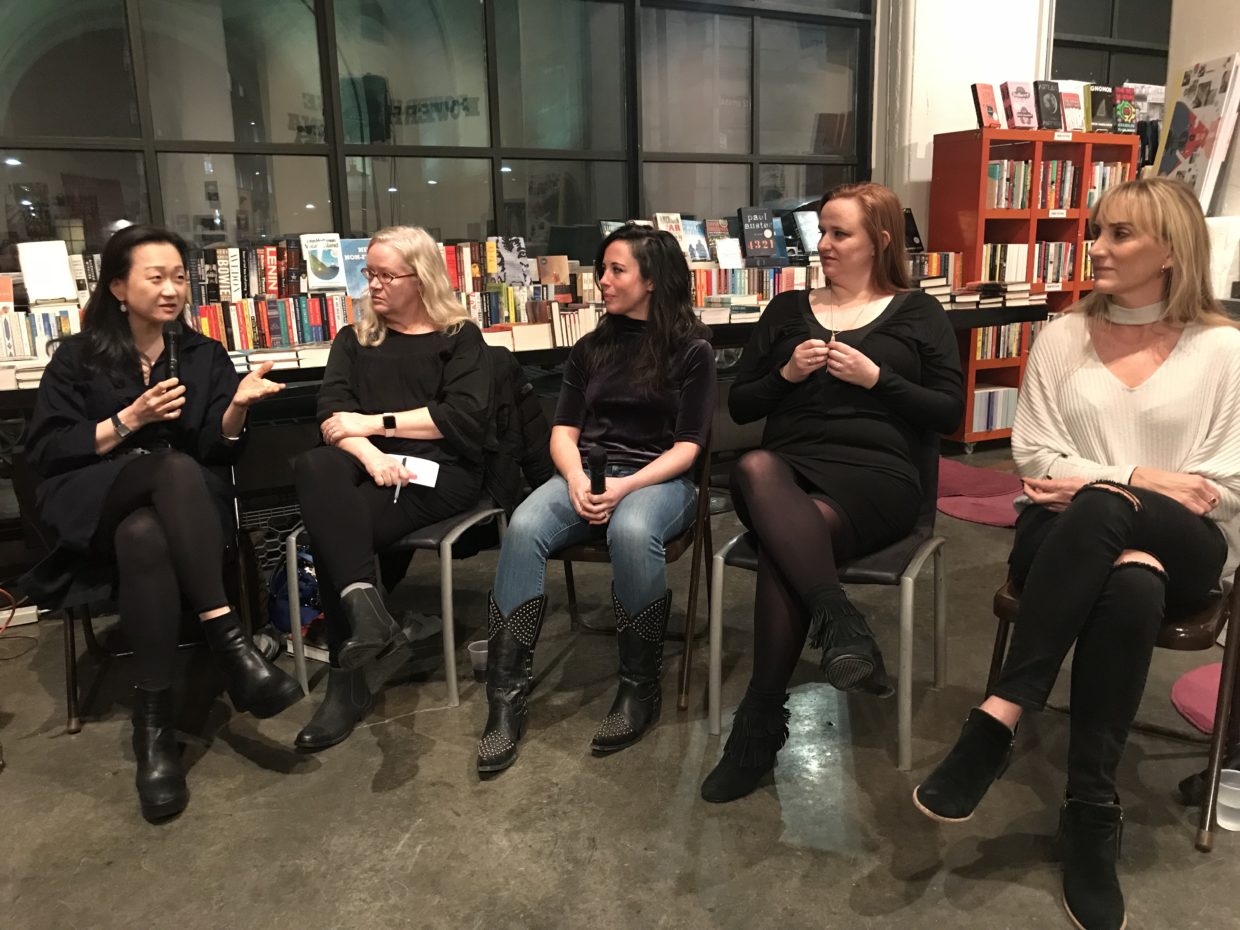 MF: Jamie, in Fire Sermon you write, “C.S. Lewis says that if we were able to return to the locus of our nostalgia, the place or person or spot of time in which we experienced joy, we would find only more nostalgia. As far back as we could go—a view from a childhood window, patterned light on a nursery wall—we would find only an unsatisfied desire that is itself more desirable than any other satisfaction. An indication not of the illusion of our existence, but of its ultimate reality elsewhere. A home we once knew but can’t quite remember, to which we will someday return.”

And that’s just beautiful, I think it’s an appropriate way to look at envy, this idea of the unsatisfied desire being something we have always known but we can’t always grasp.

Jamie Quatro: That envy in ourselves, if we kind of take a step back from it, and evaluate it and observe it and think, well, what is it that I’m envious of, that can be an indication of something, like from that passage, some longing that we have in ourselves—possibly a calling.

For example, when I was growing up and kind of starting to get my feet wet writing and I would go to these readings, and I would go to these events and I would see authors sitting up front, I had this feeling in my stomach like—I want that, I want to do that. And now I’m like why did I want to do that. [laughter] It’s terrifying. But truly I would feel this passion and I think that it was like the coin flip of envy. I was envious but I was also excited and it motivated me and it made me want to go home and write. So I think if you can step back from your own envy and see those things and evaluate and it and say, OK I think this is an indication of something, an indication of my calling. Let it motivate me and flip it on it’s head like Kate said, it can help you with motivation.

Someone told me that when you envy someone else that implicit in that idea is that you believe there is a pie and only so much of it available, and if someone else gets a piece of that pie that’s less pie for me. But that’s bunk. [If] we encourage and support each other the more success there is, it multiplies. To remember that when you feel that envious feeling.

“I wrestled with death as a
threshold, an aporia, a bandit,
a part of life”

“The poem is restorative, rather
than fragmenting.”