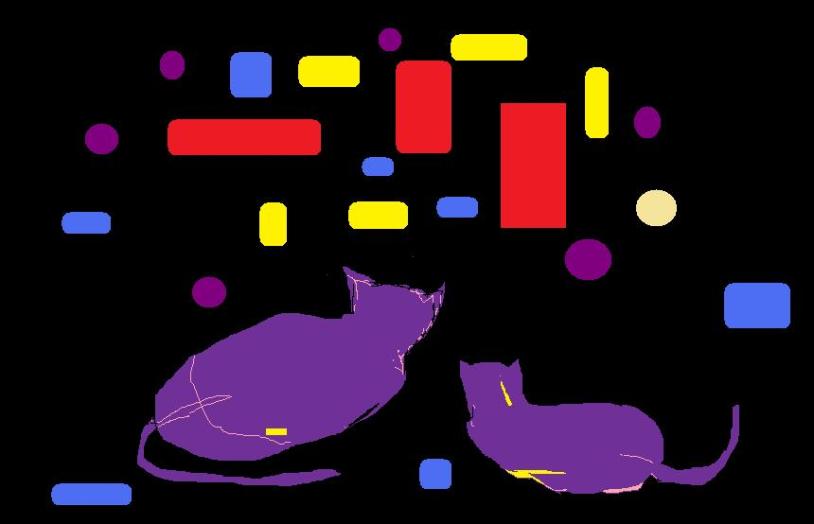 Stan was standing on a small step ladder washing his windows yet again with a clean blue microfibre and elastane cloth and some windolene he had bought in Tesco’sI don’t know why I bother,he whispered to Emile, who as usual was watching from the back of the sofa,which he was “milking” gently with his paws.With all the rain,the outside of the windows was besmirched by leaves and bits of mud.A wiser man might have left it alone but Stan had O.C.D which made him very nervous if he failed to carry out certain tasks… so he made use of it in house chores and baking perfect cakes and buns..and in taking photos of frogs,birds and flowers.Neurosis can be useful sometimes.

All of a sudden he heard clattering footsteps…
Up the garden path walked two women dressed in the latest style of 3/4 length silk cargo trousers with matching blouses, all in a subtle shade of violet.Except for their faces,of course,which were both a light shade of beige and they had Revlon peach blusher on their cheeks and Chanel scarlet lipstick…on their lips.They also wore dark blue nail varnish from Rimmel
“Good morning,Stan!” called one of them.”We are Anne’s cousins from Pittsburgh.She told us to call on you today.”
“Well,I never knew wearing expensive makeup ran in the genes… can there be any other explanation?”Stan cried.
“Anne told us we must wear it all the time in the UK.”
she responded,”even in bed.”
“You seem a bit fast,” he answered,
“I’m not sure I want to go to bed and as you seem like identical twins,which of you should I bed?”
They burst out laughing….oh,what a noise!
“I was just saying what she told us,not meaning that you need to go to bed with us.In fact, we sleep together at night.”
“As children that would be normal,but don’t you think you should separate now?People might think you are gay!”
“We never worry about stuff like that… and by the way,this is Ruby and I am Rosie.”
“I’ll put on the kettle and make you some coffee,” the dear man said in a kind tone of voice before he went into the kitchen and swallowed a handful of red and green striped valium tablets.
“I wish the psychiatrist would give me some therapy.I don’t like taking valium but I seem to be having visions again… and I don’t want to get worse.. never heard Anne mention cousins in the USA. I wonder if CBT would help me?”he said to Emile.
“I see visions all the time,” the cat replied in a matter of fact and calm way.
“Do they not make you feel anxious?”Stan called.
“No,I just watch them drift by,” purred Emile.”I enjoy them.”
“I wish these two women would drift off.”responded the weary yet charming old man.Ruby and Rosie came inside and admired the kitchen where colanders in many colours hung from the wall into which someone had knocked a few dozen nails.
“”Why do you have sixteen colanders?”asked Rosie.
“Why do you think everything has a reason?”Stan replied.
“I can see you studied philosophy,” Ruby cried disconsolately.
“No,I have just read Ray Monk’s Life of Wittgenstein eight times,” he quipped merrily.
“Wow,is it not boring?”
“No.it’s so good it put me off reading lesser books.And I love to understand things,”
Just then Stan tripped on the rug and fell over unconsciously
.Emile picked up his mobile with its full Qwerty key pad and texted 999.
“Why are you texting?”asked Ruby.
“Well,it difficult to mioaw down a phone and now I have this Blackberry it’s so easy…. why even a mouse could do it.”
“Do you know many mice,Emile?” enquired Ruby wistfully
Rosie slowly made some instant coffee, walking around poor Stan ,unconscious on the floor…and she and her twin sat down on some white Swedish chairs at the old oak table and drank it,gazing shyly at the huge weigelia blooming outside in the shed.
The front door opened and in ran Dave,the bisexual paramedic.
“Is it you,Emile.Have you lost your hankie again.Are you sad?” he moaned nervously.
“No,it’s Stan… but at least he’s not broken the chair”
Stan came too and looked up…
“Oh, lovely,I feel much better for that nap” he said brightly.
“Don’t you have a bed to sleep in?” said Ruby querulously.”I like your mean expression,my dear man.”
“Now,look here said Stan,”I’m too old for any monkey business.
Besides,I don’t know if you are real.”
“We just wondered why you slept on the floor.”
“A man has to do what a man has to do,” came the mystifying response.
“Now that Dave is here,he can take one of you and I’ll take the other.”
“Where will you take us”the twins asked delightfully….
“Do you fancy the cinema… they are showing Monsieur Hulot’s Holiday”
“Don’t tell me he’s still on his summer holiday!” riposted Ruby
“Let’s go in the ambulance.I’ll lie on the stretcher” offered Rosie generously.
“I’ll lie by you,”said Dave.” and Emile can drive.Stan and Ruby can lie on the floor.”
Sometimes life seems so simple,it’s rather like a dream controlled.
Controlled by what,asked Emile,clutching his Blackberry.
But answer came there none…
And that was very odd because.. they’d vanished every one…
To read more,why not take out a subscription?At just £100 a day,it’s value for money…as money no longer has any value!