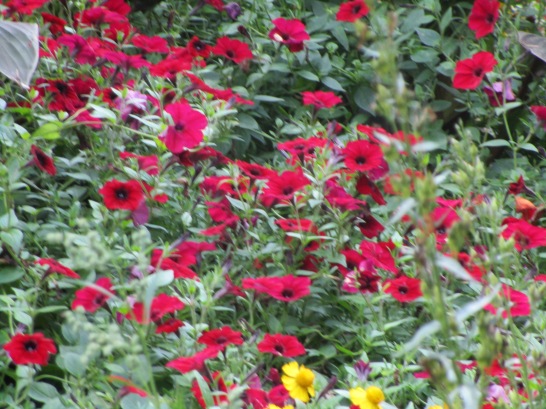 While her potato was baking Rosa decided to wash her hair.The first thing she found was Persil Silk and Wool wash.She poured it over  her head and rubbed it in.Just then the new doorbell rang.Today it was playing Puppet on a string ,made famous by Sandy Shaw.She opened the door and found her fellow academic Charlie Blogge  outside.
What is that strange concoction on your head,he asked?
I am waiting for a thunderstorm to rinse it off, she admitted shyly.
Have you  no piped water,he asked furtively.
Yes,but I am on a meter.I save money by bathing in the rain, she said softly.
That explains a lot,Charlie thought
Do you use an antiperspirant?
Why are you asking questions, she said sheepishly.Do I smell?
He approached her gingerly and sniffed loudly.Delightful ,he cried.What is it?
Rose and wisteria water in a bed of lettuce…sorry, that is the menu for my dinner party.
Am I invited ,he asked gently? I can lay the table
It is  not a carpet, she said humorously.I am doing mock turtle soup which is a jelly and then lamb chops with mushrooms and garlic.After that ,I have decided to make a Russian cheesecake with almonds.
Why,can’t you buy any Russians in Waitrose ? Why did you decide on that?
I said,Oh Lord, where is the Penguin Jewish Cookery book and immediately it fell onto my head.It is quite small,luckily.
Wow, that’s odd he said  curiously Why did God do that  yet not kill Hitler?
We don’t understand.Maybe we can’t understand however he would not have dropped the North Korean cookery book onto my head.
What sort of food do they eat? Charlie asked
I imagine it’s rice and veg ,she murmured.
What a lovely voice you have, Rosa.It reminds me of High Force Waterfall in Upper Teesdale  in a drought
That is a very unusual compliment,Rosa cried anxiously
He bowed politely.It’s no more than you deserve, he responded.By the way, I  have decided to get married.
To whom, she asked curiously?
Can’t you guess, he teased her.
Animal,vegetable or mineral?
He took her in his arms and whispered, will you be mine?
As long as I don’t have to boil your hankies I shall accept on one other condition
What is that?
We buy a very big bed
Don’t you want to snuggle up to me? he asked rashly.
No,I want an electrified fence down the middle!
By gum, she’s gone mad, he told himself
You must  stop following Donald Grump. It’s all walls and fences
You are right she said, we’ll build a wall down the middle and then we’ll need passports before we make love.
Well,said Charlie,you certainly have some unusually  creative ideas.
And so say all of us.

3 thoughts on “A passport to love”